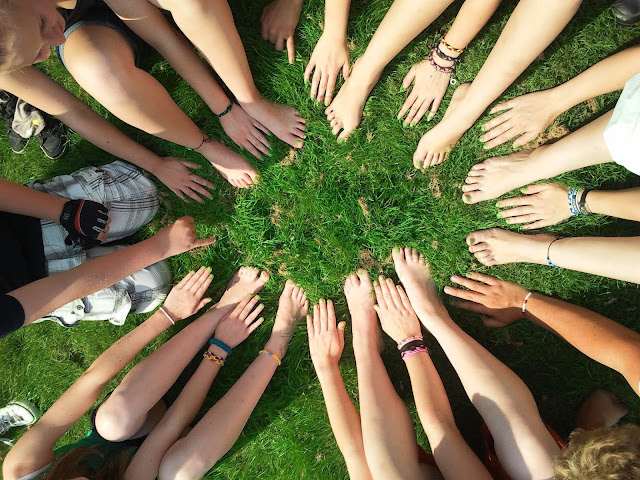 Ok so when you start yoga, people are ready to tell you all the positives - that it'll change your life, that you'll become more flexible/stronger/balanced - and all the negatives - there *may* be involuntary passing of gas, you might fall over when you try and balance, people might see your pants through your leggings - etc. etc. etc.  However, what they fail to mention is that probably the hardest thing to do is actually to pluck up the courage, book a class and walk through the doors.

In a world where we spend copious amounts of our day to day life behind a computer screen, going out into the 'real' world and interacting with 'real' people is not always easy.  Especially if you're worried that those people are going to be toned gods and goddesses who weave their own clothes from yak's milk and discuss in great detail how to power up their root chakras.  Yes, yoga is a spiritual practice and to be honest, it is one of my bugbears when people just make it into 'just' an exercise class (but that's for a whole other blog), but it doesn't mean that the people who practise it are enlightened beings who float on air rather than walk like us mere mortals!

I've been prompted to write this post by a few of my new students who said that they were openly terrified of walking through the door on their first class.  Their fears were very different, ranging from whether they would be flexible enough to whether they would be able to keep up with the pace.  Yet all of them were essentially worried about the same thing: namely whether they would fit in.  Men are often worried that they will 'be the only bloke in a room full of girls' and women are worried that their shape/size/age will in someway make them stand out like a sore thumb.  It's easy to offer advice, such as "so what if you are the only guy there" or "who cares what you look like", but that's very much easier said than done.

It got me thinking that there must be hundreds (maybe thousands?) of men and women out there right now who would benefit from starting yoga practice and who would absolutely love it, but are just too bloody petrified to pick their phones up to book a class.  This makes me incredibly sad; yoga is a wonderful practice that actually helps us love and accept ourselves. One of the eight limbs of yoga is called Niyama, and without going into too much detail, one of the key aspects of Niyama is to be content.  I interpret this as being accepting and content with who we are; not always easy when were being bombarded with social media images of seemingly perfect individuals or popular TV shows like Love Island that only showcase physically attractive young people.

When someone calls me to enquire about yoga classes, I go to great lengths to reassure them that there is a mix of genders, age and abilities in the groups.  I teach male and female students, people in their 20s up to their late 60s, pregnant ladies, sportspeople, people who have never exercised before, muscly people, skinny people, confident people, quiet people - the list goes on.  But you know what?  We all have one thing in common and that's our yoga community.  We come together to practise yoga because it is important to us.  Yes, we laugh, we wobble, we may fall over, we may get frustrated when we can't execute a certain asana, but essentially, we are all there for ourselves and because doing yoga makes us feel like better human beings!

I spent 12 years working as a secondary school teacher and yes, they paid me the big bucks to tell other teachers how to teach.  What made me such an expert? I regularly had 30 students in my exam groups and I knew each one's name, target grades, working at grades, and more importantly, what their interests or hobbies were, what pets they had, what made them laugh.  Why?  Because if we treat people like individuals and not just a number or statistic we really see them for who they are, for what makes them shine. To be honest, I haven't changed my approach when teaching yoga (obviously there's no target grades in yoga but hell yeah, we all have that 'Eleanor' pose we want to attain - that's a Gone in 60 Seconds reference if you weren't sure - great film, go and watch it if you haven't already).

One of the reasons I offer people sometimes 3 or 4 different variations of a pose is so that they can access what is right for them at that very moment.  Sometimes we walk into class feeling a bit shit; maybe we're tired, maybe we are stressed, maybe we're there to rehab an injury.  Whatever the reason, that mind-body connection needs soothing not forcing into conforming with everyone else in the room.  Quite often I'll stand at the front and demo a pose then say "I'm not doing it on the other side", or "there's a progression but I don't feel like doing it today", but I will support students who want to.  I know my body, I know how it works, what is a challenge and what is just downright uncomfortable.

This week in class, we've been working on inner focus, on recognising what our bodies can and can't do, on how our feelings affect our physical movements.  We've done some fast-paced asanas, we've done some slow focussed stretching, we spent time in savasana, we're meditated, we've even channeled reiki healing.  It has been individual, it has been tough at times, but I really hope it has got people more in tune with their bodies and perhaps a little closer to accepting themselves more in general.

And just to finish...back when I lived in Canary Wharf I used to got to a yoga class where everyone seemed to be at least 5' 10" and looked like a professional dancer.  I said hello as I walked in the first time and no one answered...complete tumbleweed moment.  It felt like they maybe gave me a nanosecond of contempt before moving onto their mats and performing perfect crow poses.  You know what?  Yes, that did make me feel a bit crap at the time, but I look back now and can laugh about it.  I don't know what problems those people were facing, maybe those contemptuous looks weren't actually contemptuous, maybe they were actually too shy to say hi back, on reflection, I don't even think they were actually all that tall and perfectly formed.  Who knows?  All I can say is that you definitely won't get a reaction like that in one of my classes!  We are the friendliest bunch of yogis I think I have ever encountered; we laugh every class, we chat, we share stories and we even socialise together.  You won't be one of 40 students squashed into a room, barely able to see the teacher and wondering what the hell you're doing there. I am incredibly lucky to be part of such a wonderful yogic community and that community is something that is very important to us all.

So, if you're still hovering over the 'book now' button or phone, wondering if you should start yoga,  then press the button, make the call. Go and try it out.  You never know, you might just find your tribe.

The Power of Pets

August 30, 2018
I am quite aware that people secretly think I'm a 'crazy guinea pig/rabbit lady' and if there's any bunny or piggy memes on Facebook or Instagram, I know who's going to get tagged in them!  Like many of you out there, my pets are family to me. Ever since I was tiny, there's always been a pet of some kind on the house - guinea pigs, rabbits, cats, dogs, hamsters, chicken, ducks, fish - even had a pony as a kid but obviously, that didn't live in the house!  Before you think it, no I haven't/don't live on a farm either! Aside from all the wonderful aspects of their personalities and the hilarious things they do, my pets are a way of helping manage my mental health.  Knowing that there is a small creature that is completely reliant upon you to get up every day and ensure its basic needs are met, is a great way to keep yourself motivated and on track.  The companionship and unconditional love you get from a pet is also invaluable; they don't c
Post a Comment
Read more