My First Half Marathon Race: MK Festival of Running 2018 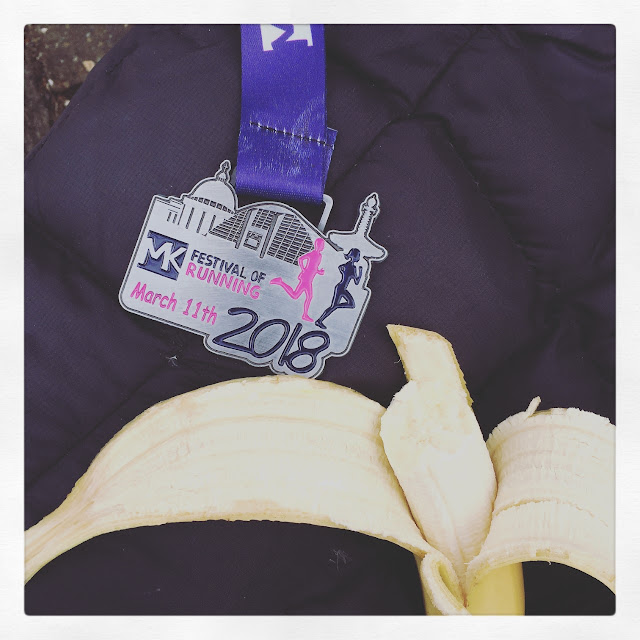 Despite running half marathon/half marathon + distances consistently every weekend for over a month, Sunday was my first official race.

I chose to take part in the MK Festival of Running 2018 Half Marathon as it's only a few minutes down the road from where I live, and I figured that MK would be a relatively flat course.  The weather has been utterly vile recently so I was pleasantly surprised to find that Sunday was warm and sunny and finally felt like a proper spring day!

The race itself had a nice downhill section to begin with and then felt pretty flat all the way round until...the HILL OF DOOM at the very end.  The last mile required us to run up Campbell Hill and good grief, I cannot imagine a worse hill to do at that point in the race.  Most people seemed to be power-walking or slow jogging up it and I did a mixture of the two.  Thankfully, the finish line was flat so I was able to do a sprint finish...hurrah.

In terms of times, I wanted under 2:20 and was on track for 2:10 and going really well until mile 11.  I'm not sure what happened but having been doing around 10 minute miles until then, I suddenly felt like I was running through treacle and felt really off.  I ate one of my Clif Bloks and had a bit more water, which then gave me a stitch, but at least I felt I had some energy left in the tank.  Unfortunately, this was easily my worst mile and I needed up doing an 11:45 mile, which then completely scuppered my 2:10 finish time.  Added to that the nasty hill,  I knew that I would have to be more realistic about a 2:15 time.

In the end, I managed 2:16:12 on my chip timer, which I was happy about and I know I can easily improve upon that next time.  I had spent the day before feeling really poorly with an upset tummy and so I know my pre-race fuelling was a bit rubbish, to put it mildly.

I did feel a tad queasy after I'd driven home but after a bag of ready salted crips, I felt totally fine again - think I need to work on my salt intake for London!

It was a really friendly race; people were chatting and supporting one another. Lots of great spectators handing out sweeties, oranges and general support.  I'll definitely sign up for next year's as  it was a lovely atmosphere.  There was also a 5k, 10k and 20 mile option.  The medal is great - really big and weighty - and the race T shirt, which cost me £9 is good quality.  There were loads of water stops and a banana at the finishing line.

Looking forward to this weekend as we have an 18 miler to do with the running club.  I'm resting now until my mid-week slow 10 miles.

Less than 6 weeks until London...

June 15, 2018
Ok so when you start yoga, people are ready to tell you all the positives - that it'll change your life, that you'll become more flexible/stronger/balanced - and all the negatives - there *may* be involuntary passing of gas, you might fall over when you try and balance, people might see your pants through your leggings - etc. etc. etc.  However, what they fail to mention is that probably the hardest thing to do is actually to pluck up the courage, book a class and walk through the doors. In a world where we spend copious amounts of our day to day life behind a computer screen, going out into the 'real' world and interacting with 'real' people is not always easy.  Especially if you're worried that those people are going to be toned gods and goddesses who weave their own clothes from yak's milk and discuss in great detail how to power up their root chakras.  Yes, yoga is a spiritual practice and to be honest, it is one of my bugbears when people just
Post a Comment
Read more